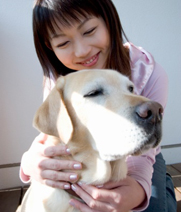 King Sigfred, a Los Angeles Great Dane, starts his day with the first of his three small, high-protein, high-fiber and low-carbohydrate meals. His water bowl contains just enough water during mealtimes — about a cup, in his case — and he doesn’t exercise for two hours after a meal, to promote proper digestion.

His housemate, miniature schnauzer Clara, on the other hand, receives her insulin injection and eats at 7 a.m. sharp. After her morning meal ritual, she goes for a 45-minute walk. She does best with no changes, sticking to the same calories and exercise every day to maintain regular blood sugar levels.

In both cases, the dog’s owner, accountant David Carleton, takes such measures to prevent his dogs’ hereditary conditions from worsening. Great Danes are predisposed to bloat, while Schnauzers have a tendency to get diabetes. However, as with King Sigfred and Clara, hereditary issues need not weigh down on your pet and disrupt your lives.

Learn the DNA ABCs
It first helps to understand a bit about genetics, which is at the root of the entire problem. Genetics can refer to inherited variation in DNA, a specialized acid that contains the instructions used in the development of all living organisms. Genetic predisposition means that your dog is at risk of getting a health problem due to its breed and that breed’s associated genes. Just as diabetes, epilepsy, cancer and arthritis can run in certain human families, these conditions can pass down through dog families, too, even if your pet is a mutt with multiple breeds on its family tree.

All breeds are susceptible to genetic-associated ailments. There is no way to tell if a puppy will have any of the predisposed diseases, since genetics is strictly luck of the draw. Two littermates may or may not have the same genetic makeup. Also, being predisposed just means a risk that is higher than normal. By the same token, a dog that is not predisposed can get diseases with a genetic component. Nothing is cast in stone when it comes to genetics.

Diseases and Conditions Linked to Certain Breeds
Here are a few common breeds with some of the disorders they may inherit:

Two of the most common genetic-linked health issues among virtually all breeds are hip dysplasia and allergies.

Hip Dysplasia
Hip dysplasia is abnormal development and growth of the hip joint — common in larger dogs — that can cause painful arthritis and movement problems. Dogs typically show signs at five to eight months of age. You can’t prevent the condition, but you can keep it from getting worse. “The big issue is nutrition,” said Dr. Greg L. Harasen, DVM, an orthopedic veterinary surgeon in Regina, Saskatchewan. “Dogs on high-energy rations as puppies, which grow at a more rapid rate, have more severe changes in their hips. The rations don’t cause the problem; they make the changes worse.” He explains that the problem is that some people feed their pups too much, elevating their dogs’energy and calcium levels, which forces the undesired rapid growth. Be sure to feed your pet according to manufacturer and veterinary guidelines.

For appropriate cases, there are surgical fixes to get your dog walking more easily again. Another remedy for adult canines is weight control. “In dogs with degenerative changes in their hips, the more they weigh as adults, the more clinical signs they tend to have,” says Dr. Harasen. Prevent obesity by not overfeeding your dog, by making sure that you account for all food consumed, including treats and kitchen handouts. Be sure that your dog gets enough exercise as well.

Sophie, a four-year-old dog owned by Susan Shalaby, a teacher in West Allis, Wis., has the hip dysplasia that affects many Bernese mountain dogs. Shalaby keeps Sophie at a healthy weight. “We take slow, short walks, and I adjust to her speed,” says Shalaby. “She takes a glucosamine supplement.” Two different pain relievers gave Sophie tummy upset, so Shalaby is researching others. Sophie whimpers when a metal brush is used over her hips, so a softer brush is used instead. “We’ll probably put a ramp in so she won’t have to deal with stairs as she gets older.”

Allergies
Allergies can also be inherited, with flea allergies among the most common for dogs. Amy Tiedt, a veterinary technician in Brooklyn, Wis., knows her West Highland white terrier, Fred, is wildly allergic to fleas and dust mites. Just two fleas can cause him to start scratching badly enough to need antibiotics. Dust mites make him just as miserable. Total flea control is critical. “I use topical flea preventive religiously and mark the calendar so applications are never late,” says Tiedt. To avoid steroid use, Fred gets daily fatty acid supplements and antihistamines as needed.

For dust mites, Tiedt regularly washes Fred’s dog bed, washable toys, her bedspread and bedding. Dust mites thrive in humidity, so in humid weather, Tiedt turns on her air conditioner. She vacuums with a HEPA filter and bathes her pet every so often with a hypoallergenic shampoo. She also says, “Fred gets an antihistamine before therapy visits because he’s allergic to something there. It’s all about managing his environment.”

Bad Genes, Not Bad Dogs
Fred, King Sigfred and other dogs prove daily that a hereditary disease doesn’t automatically mean that you and your dog must suffer. Sometimes you can prevent or delay conditions by following specific medical and nutritional recommendations. Your veterinarian can advise you, but the day-to-day management is up to you.