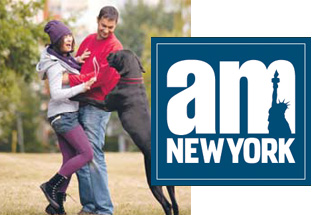 Helping your mate love your pet, too

When Angela Carr and her boyfriend, Frank Acosta, were making plans to move in together, one topic repeatedly would come up: her two cats.

Carr, 31, always had animals in her life, while Frank, 29, led a pet-free existence. And while he was willing to try, the idea of sharing his one-bedroom apartment

in Jersey City with cats — and the inevitable hair balls and litter box — made him “extremely uncomfortable,” Carr said. “I had no idea what to do.”

Honesty first
It’s no surprise that urbanites tend to develop intimate relationships with their animals, more so than people living elsewhere. According to pet and relationship guru Sheryl Matthys, this is due to the fact that city dwellers often share small spaces with their pets.
However, not everyone you meet is going to adore Fido or Fifi. When it comes to dating, animal owners should be up front with partners about pets, Matthys said. “That doesn’t mean [droning] on about them — that would even scare off an animal lover,” she said, but she advises people to mention their pet and how much time they spend with it.

Getting to know Fido
So what should you do if a love interest can’t stomach being around your pet? Making an effort to introduce partners to your pet is key, said Matthys, who recommended pointing out the joys of being pet owner. Often, a person’s ambivalence stems from lack of exposure to animals, she said.
To break through that ambivalence, set up some alone time between your pet and your date. If it’s a dog, let your partner walk him around the block or feed him by hand. “Let your dog be the one to work the miracle,” Matthys said.

Compromise is key
In her new book, “Leashes and Lovers: What Your Dog Can Teach You About Love, Life, and Happiness,” Matthys stresses the importance of compromise. Concessions can include no longer letting your pet sleep in your bed or taking sole responsibility for the animal.
In Carr’s case, she moved the cats to her dad’s house in Pennsylvania.
“Living together in a new home was enough of a step,” she said.
“I miss them dearly, but it’s working out for everyone.”