Diabetes in Dogs: Symptoms and Treatment 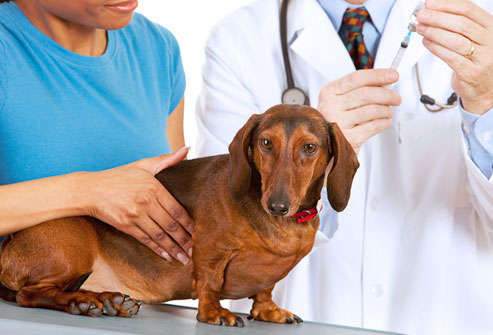 Brooklyn-based marketing manager Lori Townsend adopted her long-haired dachshund, Daisy, when the pup was weaned at 10 weeks old. Daisy had no health problems to speak of until soon after her seventh birthday: Suddenly she emptied her water dish more frequently and soaked the bathroom rug regularly with urine. “She hadn’t had an accident since she was a puppy, so I knew something was wrong,” says Townsend. She took her furry friend to the veterinarian, who tested Daisy’s urine and blood and ultimately diagnosed the dog with diabetes.

“Diabetes is pretty common in middle-age dogs,” says Virginia-based emergency veterinarian Dr. Katy Nelson. “Nobody knows why it happens, but the cells in the pancreas that make insulin begin to dysfunction.” Below, Nelson explains the signs and treatment of diabetes mellitus (aka “sugar diabetes”) in canines.

What Is Diabetes Mellitus?
Just as humans get two types of diabetes (type 1 and 2), so do pets. Dogs are more likely by far to have type 1, insulin-dependent diabetes, which results from the body’s failure to produce insulin. Canines are at much lower risk for type 2, insulin-resistant diabetes, in which cells cannot use insulin properly. Nevertheless, about one in every 100 dogs will develop diabetes in its lifetime.

What Are the Symptoms?
“PU/PD,” says Nelson, referring to polyuria (urinating a lot) and polydipsia (drinking a lot). “All of a sudden you can’t keep the water bowl full, and a house-trained dog is going all over the place.” She adds that sudden weight change — loss or gain — as well as vomiting and diarrhea are additional possible symptoms.

“The symptoms are pretty nonspecific. The most common thing we have people bring their dogs in for is acting strange, and drinking and peeing a lot.”

How Is It Treated?
There is no cure for canine diabetes, but it can be managed to maintain a pet’s quality of life. The treatment for diabetes in dogs involves three parts:

1. Insulin injections. “This is No. 1,” says Nelson. The dog’s insulin must be regulated, which takes a few months of trial-and-error dosing in order to happen. “You need to like your veterinarian, because you’re going to see that person a lot.” Dogs are monitored frequently, often during 24-hour office visits, in the period following initial diagnosis. A diabetic dog requires due diligence from the owner, who most typically must inject the dog twice daily, at fairly precise 12-hour intervals. The needles are small, and when administered in the scruff of the neck while the dog is eating, the dog may not even notice the prick.

2. Diet. Overweight dogs have an increased chance of developing diabetes. However, a diabetes diet does not necessarily mean one that promotes weight loss, just one that is prescribed by the veterinarian. Says Nelson: “I suggest a food with a high-quality, animal-based protein source with an immediate glucose source like rice but also an extended glucose source like corn or barley.” Meals must be provided on a consistent schedule as well.

3. Exercise. Regular exercise can improve insulin absorption in diabetic dogs. However, more is not always better. A diabetic dog should have roughly the same amount of exercise each day (or an increasing amount only slowly) to avoid hypoglycemia. That condition can result in loss of consciousness and the need for emergency treatment. Your veterinarian should supervise your furry friend’s workout regimen along with its insulin and diet.

Townsend’s dachshund, Daisy, just celebrated her ninth birthday. The chronic condition has not been easy for Townsend to contend with. “She definitely needs a lot more care than before she developed diabetes,” says the dog lover, who not only injects her pet with insulin each morning and evening at 7, but also tests her pet’s blood glucose before each meal with a blood glucose meter and urine test strips. Townshend additionally takes Daisy to the veterinarian regularly and is extra-vigilant to ensure her pet does not get into the trash. “It’s hard work, but I wouldn’t treat a member of my family any other way,” says Townsend.

Darcy Lockman is a freelance writer whose work has appeared in The New York Times and Rolling Stone. She lives in Brooklyn with the prettiest pug dog in the five boroughs.