Does Your Dog Get Jealous? 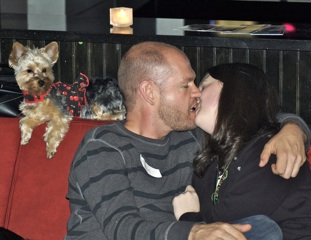 By Scott Rose
Jan. 2011
For ages, many animal experts held that all dog behavior, including possible jealous tendencies, stemmed from instinct rather than emotions, but new research is proving that theory wrong. So, if you recently brought a new friend or another pet into your life, and your dog suddenly seems less than friendly, you may just have a jealous pooch on your hands.
Paul Morris, Ph.D., a psychologist and animal behavior expert at the University of Portsmouth in England, determined that certain animals, including dogs, experience a wide array of emotions. Along with jealousy, these emotions include anger, anxiety, surprise, pride, embarrassment and shame.
While cats, pigs, horses, rabbits and hamsters also seem to get jealous, dogs appear to feel this emotion more often and with greater intensity. Dog owners who were included in the study consistently reported that their dogs pushed in between themselves and third party rivals for their attention.
Scientists as of yet can’t communicate with dogs to know what they are truly feeling, but the evidence so far suggests that canine emotions — including jealousy — are comparable to what we experience.
“All we can do is look at behavior and context,” Morris said. “Both the behavior and the contexts observed are consistent with current scientific definitions of jealousy. I suspect that a highly social species such as the dog has a very developed repertoire of social emotions.”
He and others plan to study animal emotions more in future. Meanwhile, what should you do if you suspect your dog is feeling jealous? Here are a few guidelines:
1. Recognize the signs
Like a spurned lover, your dog will have a hard time containing itself if it feels jealous. Sulking, snarling, growling, fighting and sluggishness can be symptoms of jealousy. Some dogs even get so upset that they stop eating. In that case, be sure to schedule a veterinary check-up to rule out possible medical causes.
2. Maintain routines
You likely have a daily routine for interacting with your dog, even if you did not establish this routine consciously. Think back to what your schedule and habits were like before the new pet or person was introduced and, whenever possible, try to reestablish that pattern with your dog. Routine is important to your dog because its jealousy, in part, comes from fear of losing its place in your life. By continuing to feed, walk, and play with your dog according to a normal schedule, you reassure your pet of its place in your heart.
3. Give extra attention
Try to spend even more time with your dog than usual during the transitional period. If the subject of your dog’s jealousy is another person, encourage that individual to play, pet and otherwise positively interact with your dog as much as possible.
4. Reinforce basic training
Your dog thinks of you as part of its pack. Now it must share you with another individual. You must remain the leader, so gently show your dog who is boss by verbally scolding negative behavior as soon as it starts. At the same time, reward positive behavior with sweet talk, head rubs, and treats, especially if your dog makes an effort to socialize with your new pack member.
5. Empathize
Whether the object of your dog’s jealousy is a new pup or person, try to remember that from your dog’s perspective, it was with you first. Your dog has attempted to earn your loyalty and affection over the years, while sharing those same gifts with you. Its jealousy is actually a measure of how much it values both you and its position within your now-growing pack.
Scott Rose , a columnist and contributor for Pampered Puppy, has also written for Modern Dog, New York Dog, Conde Nast Traveler and several other publications.