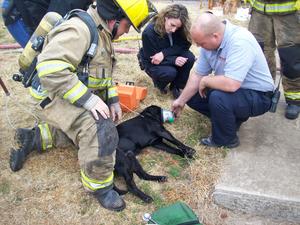 Kim Morava
2/16/11
Using a life-saving pet oxygen mask made specifically for animals, Shawnee firefighters and REACT EMS medics were able to revive a dog overcome by smoke inhalation during a house fire Wednesday.

“Initially, the dog was almost lifeless and barely able to breathe, but as crews were able to work with him and administer oxygen via the mask, he slowly became more active,” said Deputy Chief Dru Tischer.

The Shawnee Oklahoma Fire Department wouldn’t have such a mask if it weren’t for the efforts of a local student, Alyssa Johnson, who raised money to purchase masks for area fire departments back in November 2009.

Johnson, who had a love and care for animals, and her grandmother, Nancy Spears, owner of Lake Road Pet Boarding, worked to collect donations to purchase 12 of the masks for area firefighters to carry on their trucks.

Spears had a happy and tearful reaction to the dog being saved. “This is what it was all about — this literally brings tears to my eyes,” Spears said. “This makes it worth it all — I’m so glad.”

Johnson, who didn’t hear the good news until getting home from school, also was happy and credited all those people who donated their change and dollars to her fundraising mission to make sure firefighters had these masks.

“I’m thankful and God had his hands over us,” she said, thankful about the pet’s life being saved.

Shawnee firefighters responded about 8:48 a.m. Wednesday to 108 W. Farrall, a residence near Beard and Farrall Streets, after the fire was noticed by Shawnee Police Cpl. Bricen Mohr. At the time of the call, Tischer said five of the shift’s 11 firefighters on duty were working a traffic accident on U.S. 177, so fire crews from Station No. 1 were first to arrive. They found fire burning through the east side of the home and threatening to ignite the commercial structure adjacent to it, he said.

“Initially, crews attacked the fire from the exterior to knock it down and protect the second structure,” he said. Once more firefighters had arrived to make for a safe interior attack, Tischer said firefighters entered the home to fully extinguish the fire and minimize damage. Crews conducted a primary search of the home and found two dogs that had been overcome by smoke inhalation.

Battalion Chief David Short said those two dogs, both Black Labrador Retrievers, were found hiding under a bed and taken to safety.

Firefighters, along with REACT Emergency Medical Service medics, were able to resuscitate one of those dogs using one of the Pet Oxygen Masks donated to the department by Johnson. When Shawnee Fire Chief Jimmy Gibson walked up to the scene and saw the dog “wagging his tail,” Gibson said he thought of Johnson and her efforts to make sure firefighters had these masks for situations like these.

Short said the home’s occupant wasn’t there at the time of the blaze, so the dog was turned over to Shawnee Animal Control for care. The dog was soon up and walking around on a leash. Cause of the fire is believed to be electrical, Short said. He said crews were happy they saved the dog’s life, and also glad to keep the fire from spreading to the nearby commercial business on one side and a house on the other side.

Did you know?
Through setting out canisters at area veterinarian offices, pet boarding and grooming businesses, along with fundraisers at her school, Alyssa Johnson of Shawnee raised more than $600 back in 2009 to purchase 12 pet oxygen masks for area fire departments — Shawnee, Tecumseh, Meeker, McLoud, Bethel Acres and Earlsboro. One of those masks was used Wednesday to save a dog’s life.