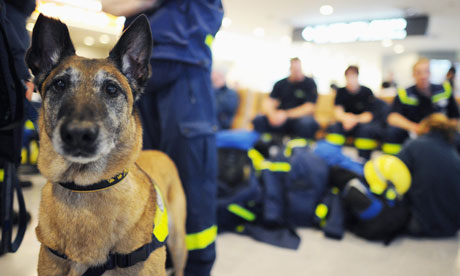 admin
march 2011
Japan’s stringent customs regulations on importing animals delayed a Swiss search and rescue team from getting their nine highly trained dogs to the quake zone quickly, as time to find those trapped by the tsunami dwindles.

While the death toll here grows by the hour, U.S. officials said they are working with the Japanese to expedite approval of 150 American rescuers and 12 trained dogs from Virginia and California now on their way to Japan to avoid similar bureaucratic snafus.
The U.S. military assistance operation for Japan, been dubbed Operation Tomodachi which means “friendship” in Japanese, has begun with the arrival of the aircraft carrier USS Ronald Reagan off the coast. Helicopters from the carrier have delivered food and supplies to several towns, while others are expected to begin helping evacuate people from Takada City.

The Swiss team, however, was among the first to arrive at Japan and rescuers chafed at the delays. “There are many rules here. So it’s taking a long time,” a member of the Swiss team told ABC News.com in the customs area of Narita International Airport, moments after an aftershock rolled through the airport, a visceral reminder of the still tenuous situation here.

As of Sunday, authorities estimated 1,400 people had died and hundreds more are reported missing. But officials fears the dead and those buried and still alive may be in the thousands.

The group’s 25 members and nine dogs are trained to find living people, sometimes buried dozens of feet beneath debris. Though made famous by training St. Bernards to search for lost persons in the Alps, the breeds the Swiss rescuers took along to Japan included retrievers, Australian collies and border collies.

Our job is to look for living people,” said a team member not authorized to speak to the press. “Japan was very severely hit but we’re doing everything we can,” said Roger Zbinden, a Swiss Embassy official on hand to oversee the team’s arrival.

“We hope to find as many people as possible,” he said. In the days since, the Japanese government has approved aid from 49 countries.
The U.S. Embassy in Japan said Sunday there “are approximately 1,300 American citizens in the Japanese prefectures that were most affected by the earthquake and tsunami” and officials are working to make contact with them.