Marine Dies but his Bomb Sniffing Dog Gets Adopted 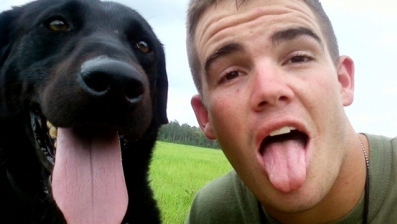 It took approval from the Secretary of the Navy and the Defense Department, but the parents of a fallen U.S. soldier were finally allowed to adopt the loyal military dog who rushed to the aid of their son when he was shot and killed in Afghanistan.

On December 6, 2010 Private First Class Colton Rusk “came under fire” after a Marine vehicle in his convoy was hit by a hidden explosive.  Rusk was shot after the soldiers stopped to secure the area during a gun battle with the Taliban.

Eli, a bomb-sniffing 4 year old Labrador Retriever and Rusk’s best buddy ran to cover his handler’s body and crawled on top of him.  He was so loyal that he “snapped” at the other Marines who came to help.

After the death of their 20-year-old son, Darrell and Kathy Rusk decided they wanted to adopt the dog their son loved.  The Rusk family explained how happy their son was when Eli was assigned to him last year.  He had grown up around dogs and was comfortable having the Lab as his partner.  The two were inseparable.  Colton even allowed Eli to sleep in his quarters on a cot instead of the dog kennel. And every time Colton called home, he always talked about his dog.  He even shared on his Facebook page that, “Whatever is mine is his.”

Although the Rusk family petitioned to adopt Eli, there were complications to the process.  The Lab wasn’t hurt in the attack and was still considered to be a working military dog.  Eli was scheduled to be assigned to another handler.  Eli was still serving his second tour of duty in Afghanistan.

However after getting permission from the Navy and the Defense Department, Eli was relieved of his military duty. On Feb. 3rd, 2011 the family picked Eli up at Lackland Air Force base to take him back home to their ranch in Texas.

This marks only the second time a U.S. military dog has been adopted by the family of a handler killed in combat. When a Marine staff sergeant handed the leash to Darrell Rusk, his wife and two sons bent down to hug Eli and the dog lifted his paw to greet them.  Everyone in the room was crying.

Eli joins the family and their 3 German shepherds.