Marine Reunited With Dog He Rescued In Iraq 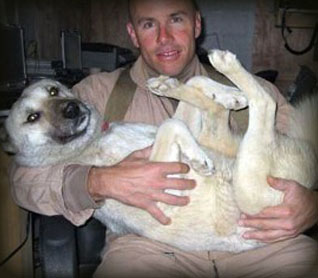 It began with a simple act of kindness to save an abused, injured dog from becoming one more victim in the Iraq war.

But what followed for Marine Maj. Brian Dennis and the mutt was a tale of friendship and loyalty that spanned miles and overcame long odds — one set to take a turn Friday with the anticipated arrival here of the Marine’s best friend.

“This dog who had been through a lifetime of fighting, war, abuse … is going to live the good life,” Dennis told his family in an e-mail from Iraq.

The tale unfolded in October, a few months after Dennis deployed to Iraq from San Diego to work as part of the military team building infrastructure along the Syria-Iraq border and training Iraqi forces to take over.

Dennis, 36, of St. Pete Beach, Fla., had volunteered for the assignment. It was a departure from his role as a fighter pilot. He had seen the country from the air, but it was different on the ground.

Dennis wrote stories home about the reciprocal relationship that desert dogs, strays wandering outside border towns, had with Iraqis.

“The dogs get to eat the Iraqi scraps and have a home in the middle of the desert,” he wrote in an e-mail. “The Iraqis get an incredible early warning system; these dogs hear anything approaching from miles away and go nuts and scramble to defend their territory.”

Life on the run
While on patrol in the Anbar province, Dennis spotted what appeared to be a gray and white, male German shepherd-border collie mix. He named the dog Nubs after learning someone cut the ears off believing it would make the dog more aggressive and alert.

Within weeks, Nubs was greeting Dennis during routine patrol stops along border communities. The Marines fed him bits of their food and by November, the Marine and his unit were keeping an eye out for the dog, which routinely chased their Humvees when they departed.

Life on the run, however, was taking a toll on the dog. He had lost a tooth and been bitten in the neck. In late December, Dennis found Nubs near death in freezing temperatures. The dog had been stabbed with a screwdriver.

Dennis rubbed antibiotic creme on the wound and slept with Nubs to keep him warm.

“I really expected when I woke up for watch he would be dead,” Dennis wrote. “Somehow he made it through the night.”

Dennis thought he had seen the last of the dog days later when his squad headed back to its command post some 65 miles away. He couldn’t take the dog with him and watched as it tried to follow the Humvees away from the border.

Two days later, while Dennis and a comrade were working on a Humvee, he looked up and saw the dog staring at him.

“Somehow that crazy damned dog tracked us,” he wrote Jan. 9.

Finally safe
But the reunion was short lived. Military policy prohibits having pets in war zones, and Dennis was given four days to get the dog off the base or kill him.

The decision was easy: Nubs was going to San Diego. The logistics, though, were anything but easy. With help from his Iraqi interpreter, Dennis managed to find a Jordanian veterinarian to get the care and paperwork needed to get the dog to the states. He also negotiated the red tape to get Nubs across the border into Jordan.

His family and close friends helped raise the $3,500 needed to get the dog from Amman, Jordan, to San Diego, said his mother, Marsha Cargo. “I just can’t believe it. Out there in the middle of nowhere these two find each other,” Cargo said.

A colleague in San Diego agreed to care for the dog and have it trained until Dennis returns in March from Iraq. “We anticipate a real steep learning curve for Nubs,” Capt. Eric Sjoberg said. “We want him to learn to just be a dog.”

For now, though, Dennis will settle for the knowledge that Nubs is finally safe — and waiting for his master to follow him.