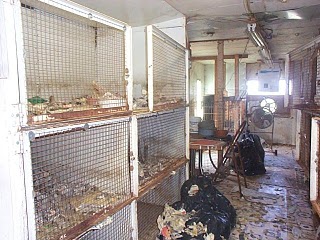 ST. LOUIS (Nov. 3, 2010) — Nearly 1 million Missouri voters sent a powerful message through the ballot box to shed the stigma of being the puppy mill capital of the country by approving Proposition B, a statewide ballot initiative to establish basic standards for the care of dogs in large-scale commercial breeding facilities. Missouri is home to an estimated 3,000 puppy mills breeding hundreds of thousands of puppies, far more than any other state in the country.

“We are grateful to the citizens of Missouri for voting to crack down on puppy mill abuses and to establish common-sense standards for the care of dogs,” said Barbara Schmitz, campaign director for Missourians for the Protection of Dogs/YES! on Prop B. “Finally these animals will have relief from being crammed into small and filthy cages, without veterinary care, exercise, or human affection. If we can do it here in the nation’s largest puppy mill state, we are more likely to carry the day with reforms enacted in other states, where this cruel industry is not nearly as strong and entrenched.”

“This is a watershed moment for the dogs in Missouri’s breeding facilities,” said Kathy Warnick, president of the Humane Society of Missouri. “They will no longer have to suffer the unspeakable cruelty and inhumane conditions that have plagued them for so long. From this point forward, a more humane and compassionate standard of care will prevail for Missouri’s dogs.”

“This was a hard-fought victory due to the misinformation and outright lies being disseminated by the opponents of Prop B,” said Bob Baker, executive director of the Missouri Alliance for Animal Legislation. “Fortunately, Missouri voters were able to distinguish the truth and recognize Prop B for what it is, a common-sense measure to ensure the humane treatment of dogs.”

“It is no more business as usual for the puppy mill industry, and we have a pathway forward that will allow us to turn around this problem for Missouri and the nation with this victory tonight for the dogs,” said Wayne Pacelle, president and CEO of The Humane Society of the United States.

“We are more hopeful than ever that the strong momentum around puppy mill cruelty will push other states to follow Missouri’s lead, causing a ripple effect throughout the nation,” said Ed Sayres, president and CEO of the ASPCA (American Society for the Prevention of Cruelty to Animals). “In no other state were the stakes higher for puppy mill dogs, and Missourians have set an admirable precedent for reform.”

“This is a tremendous victory for the hundreds of thousands of dogs suffering in Missouri’s puppy mills,” said Elizabeth Oreck, national campaign manager for Best Friends Animal Society. “The people of Missouri recognized that change needed to happen, and that they are no longer willing to support this cruel and inhumane industry. If it can be done in Missouri, where the problem is the most severe, it can be done anywhere.”

Dogs are part of the family in the United States, and they should not be treated like breeding machines or a cash crop. The supporting groups look forward to working with commercial breeders to transition to more humane systems and to set a new high bar within this industry. Missouri lawmakers and state officials should embrace this message from the people, and immediately step up enforcement efforts to address the problem of inhumane breeding operations.

At puppy mills in Missouri, dogs are typically crammed into small and filthy cages, denied veterinary care, exposed to extremes of heat and cold, and given no exercise or human affection.

Prop B amends Missouri law to require large-scale dog breeding operations to provide each dog under their care with sufficient food, clean water, housing and space; necessary veterinary care; regular exercise; and adequate rest between breeding cycles. The measure also prohibits any breeder from having more than 50 breeding dogs for the purpose of selling their puppies as pets and creates a misdemeanor crime of “puppy mill cruelty” for any violations.

Prop B was supported by Missouri veterinarians and veterinary clinics from across the state; animal welfare charities and organizations, including the Humane Society of Missouri, the Missouri Alliance for Animal Legislation, Humane Society of Southwest Missouri, Wayside Waifs, the American Society for the Prevention of Cruelty to Animals (ASPCA), the Animal Rescue Foundation (ARF), Best Friends Animal Society and The Humane Society of the United States; prominent Missouri figures such as Tony La Russa, Jack Danforth, and Linda Bond; as well as responsible dog breeders, elected officials, religious leaders and Missouri businesses; and actors Ed Asner, Chris Cooper and Kevin Kline, all native Missourians.

More than 190,000 signatures were submitted to the Secretary of State’s office in May to qualify the Puppy Mill Cruelty Prevention Act for the statewide ballot, and the measure was certified in August. The new law will take effect in November 2011, giving breeders time to meet the modest standards of care. More than 200 Missouri rescue organizations are ready and willing to take surrendered breeding dogs and find them loving homes.

Lawmakers in Iowa and Oklahoma, the second- and third-largest puppy mill states in the country, enacted puppy mill legislation earlier this year. Last year, 10 states approved legislation to crack down on cruelty at puppy mills. The animal protection groups that supported Prop B look forward to working with lawmakers in other states to ensure that dogs in puppy mills get the basic care they deserve.