Oprah, The Dogs Need You 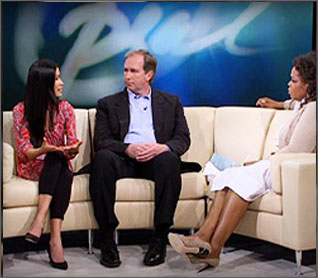 rom The Oprah Winfrey Show Lisa Ling Investigates the Hidden World of Puppy Mills
April, 2008
Sadly, Oprah’s beloved cocker spaniel Sophie died on March 10, 2008. “Sophie gave me 13 years of pure unconditional love,” Oprah says. “She was a true love in my life. In fact, she’s been one of the greatest reasons for me to be a kinder, gentler person.”
Just before Sophie passed away, Oprah—and thousands of drivers—saw a billboard just off the Kennedy Expressway in Chicago that read, “Oprah: Do a show on puppy mills. The dogs need you.”

The man behind the billboard is Bill Smith, founder of Main Line Animal Rescue. Every year, Bill and several volunteers rescue hundreds of abused, unwanted or abandoned animals, rehabilitate them and adopt them out to families. Many of the animals Bill rescues come from puppy mills, which he describes as places where bad breeders care more about the profit they make from puppies than the health or welfare of the animals. He says the dogs in puppy mills face deplorable conditions including inbreeding, minimal or no vet care, limited shelter and overcrowded cages.

“We were so frustrated … and no one seemed to be helping them,” Bill tells Oprah. “I know that you’re a huge animal lover. I just thought that you would be able to spread the word and educate a lot of people.”

The billboard certainly worked. “It is my belief that when you actually see this, America, with your own eyes,” Oprah says, “that you are not going stand for it.”
To see what goes on at puppy mills, Lisa Ling brings a hidden camera and joins Bill on a tour of puppy mills in Pennsylvania. According to The Humane Society of the United States, there may be as many as 10,000 puppy mills operating across the United States.

Lisa and Bill also visit two pet stores. Many of the dogs born in puppy mills end up in pet stores or sold on the Internet. Lisa and Bill want to trace puppies’ paperwork back to specific puppy mills. At the first store, they find a cockapoo puppy, and at the second, Labrador retriever puppies.

While the owner of a store they visit denies his dogs come from puppy mills, Bill says most at pet stores do.

“The fact is, what they’re doing is not illegal,” Lisa says. “But the objective I think here is to raise awareness. People go into the pet stores, and they see these cute little puppies not knowing where they come from and what they go through.”Lisa and Bill spend the next two days tracing the pet store puppies back to their breeders. Bill has fostered relationships with hundreds of breeders across Pennsylvania. He asks them to give him the dogs they no longer want or, worse, the ones they’re planning to kill. Bill says these breeders most often want to get rid of older females and younger males. Breeders only need one or two male dogs to breed with every 20 fertile females, so young female dogs are valuable in puppy mills.

Lisa and Bill head to the breeder where the black cockapoo was born. The breeder tells them its mother is one of the dogs in cages outside. Lisa and Bill then followed the breeder into a building full of cramped wooden crates stuffed with dogs. “The spaces are so small, the mothers are stepping all over their babies,” Lisa says. Bill says he thinks many of these dogs have never walked in the grass though they live on a 60-acre property.

Visiting the home of the Labrador retriever puppies, Lisa and Bill find the lab puppies’ mother in a small, mud-filled pen. Her teats are swollen—Bill says this is evidence she’s had many litters of puppies.
Lisa and Bill continue on to see other nearby puppy mills. In one, they find 30 to 40 dogs in wire-floored rabbit cages stacked to the ceiling in a room that reeks of urine and feces.

Before they go to one breeder’s property, Bill warns Lisa about what she may see. “It’s probably the worst place I’ve ever been to in my life. He has dogs running on wheels in fan casings,” Bill says. The contraptions look like big gerbil wheels. “[The breeder] claims that it’s good for them because they get exercise,” Bill says.

That breeder wouldn’t let them see his dogs, but Lisa and Bill saw two dead animals on the property.

At a third breeder’s facility, Lisa and Bill see outdoor cages that house scores of Pomeranians. Bill tells Lisa that not only have those dogs probably never been out of those small cages, it’s likely that they remain outside even in bad weather and could die from exposure.
All in all, Bill rescues dozens of dogs as he and Lisa visit puppy mill after puppy mill. Lisa says seeing the way the animals live was haunting. “While I feel relieved about those 39, there are hundreds that we just saw that will remain in cages for the rest of their lives,” Lisa says.

Bill says many breeders call him to see if he wants to pick up unwanted dogs. “We form relationships with some of these people, and they’re actually the good breeders because they give us the dogs,” he says. “A number of times they’ll call us and give us 45 minutes to an hour to come out and pick up a dog before they shoot it when they no longer want it. It’s always amazing to me when I go out to pick up a dog, they’ve had the dog eight or nine years and it doesn’t have a name. It’s never been out of the hutch. It doesn’t know how to walk. I have to carry it to the car. It’s heartbreaking.”

Lisa says one reason puppy mill owners keep their dogs in such conditions is cultural. “They don’t regard dogs in the same way that others may. They believe man is to dominate animals,” she says. “A number of them didn’t seem like they realized that what they were doing was inhumane because in their culture … that is what they’re supposed to be. And the fact is, there is a market for puppies in America.”

Bill says he’s asked the breeders who own puppy mills why they treat the dogs so badly. “They think that we’re fools when we pick the dogs up,” he says. “I just went back to one of the mills, and they were asking me about the cocker spaniel we pulled out. … And I said, ‘Well, she’s fine. She’s walking around the house and everything.’ And he said, ‘You let that dog walk around the house, where the people in your family live?’ And I said, ‘Yes, we do.’ He just couldn’t get over it. It’s a different mentality. [Dogs] are considered agricultural products. They’re like an ear of corn.”