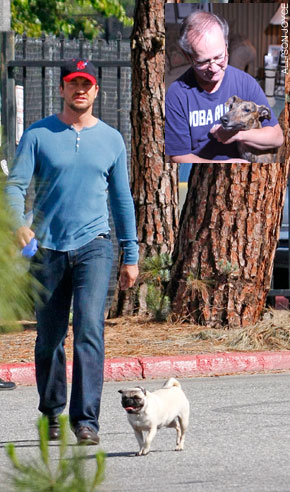 Both parties seem barking mad and we’re not even talking about the dogs yet!  On one end of the leash is ‘The Ugly Truth’ star Gerard Butler and on the other a Queens, NY couple.

Both sides differ on the extent of their verbal tussle and what occurred between their dogs.  The NY Post reports the scuffle occurred at 4 p.m. Monday, Aug. 24 on Broadway near 14th Street, as Fred and Maria Varecka were walking their dog and crossed Butler’s path and his unleashed pooch.

The actor says the dog fight began with the Varecka’s after their “huge, menacing” Greyhound, Mayfly, took two chomps and nearly a third out of the neck of his little pug, Lolita, near the set of his and Aniston’s flick, “The Bounty,” in Long Island City.

Well, if only the dogs could speak because those at the other end of the leash have conflicting stories.

Butler claims that he exchanged words with the couple after their dog bit his. The Varecka’s argue that Butler went ballistic and they say the two dogs merely touched noses and no biting occurred.  They add Butler himself was doing all the barking, slammed Mayfly’s head against a fence, screaming, “That dog should be put down!”

Maria says she replied, ‘Your dog should be put on a leash.’ He kept on going and going, ranting and raving.He was being verbally abusive. He smacked the dog in the head. The dog’s head went into the fence. I was shaking. The dog yelped. I said, ‘Keep your hands off my dog! Why did you hit my dog?’ He didn’t say a word.”

Maria adds Butler left, and she and her husband called the cops to file a report. According to the NYPD, there was a complaint against a “Gerrod Butler” but no citations were given.

Butler denies the allegation, insisting he spent four hours at a Manhattan animal hospital while vets tended to his dog’s wounds. His manager Alan Siegel says, “What happened was, Gerry was walking his dog, Lolita, who is this little, small Pug, a teeny thing. You can hold her in one arm, she’s that small. Then, suddenly, this Greyhound, this huge, menacing dog, bites Lolita. She [Maria Varecka] and Gerry then have words. . . . [Then] the dog again goes over to Lolita and takes another bite.  They (the Greyhound’s owners) don’t have it trained. They don’t know what they’re doing with their dog. People are so mean. They’re just trying to milk this.”