REMMY GETS A LIFE 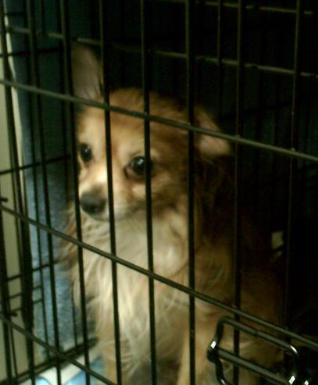 In July 2009, in the Dearborn, Michigan “House of Horror” with the neatly trimmed hedges and newly cut lawn, over 100 live (chihuahuas and chihuahua mix) dogs were found in the home of a ‘hoarder’, a man suffering from obsessive-compulsive disorder.  Unspeakably tragic, it was found that at least as many dead dogs were in freezers in the home, as well.

For many days,  the overwhelmed Dearborn Animal Shelter removed dogs and treated them for the usual afflictions from such an ordeal (fleas, malnourishment, skin irritations and infections from abhorrent lack of hygiene).

Hearing of the tragedy, Paula and her husband put in an application to adopt one of the dogs once they became available. Their application was accepted and they picked a young male dog, estimated to be about 2 years old.  Paula patiently worked with him through the expected problems, taking weeks before he would walk into his new home without hesitation…but she had never met a dog with a sweeter disposition. He loves to romp in his new yard, (having never been outdoors before!) and he is still working on the housebreaking bit.  But the family can’t believe such a sweet, loving dog could come from such a horrible place. He is now a part of their family, and they love him so!

He has a very elegant name, offically being known as “Chance Remington Harmon”, or Remmy for short.