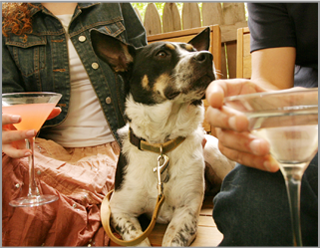 Think Before You Say ‘Heel’

“Even the most self-assured New Yorker can become paralyzed by anxiety when attending a singles event. And so it went at the at a lounge on Mulberry Street, where the bar was set for courtship on a recent Tuesday night, the lights low and the ruby walls casting an inviting glow…

The breeds were as varied in age and appearance as the owners who had dragged them along to the party, a monthly social event hosted by Leashes and Lovers, a group dedicated to bringing pet lovers and singletons together.

There was a logical symmetry to many of the pairings: a buff man swaggered in with his equally athletic Border Collie, a petite Asian woman giggled as she pet her sweet-faced pug, a curly-haired woman sauntered in with her mop-top of a poodle.

The dogs’ natural lack of inhibition worked its magic, sometimes to comic effect. A thump or caress against the shins could be thought improper until a glance down at a waggy-tailed creature below. ….

Exclamations like: “So, where’d you get your dog?” “How cute is he!” filled the room as dogs were hand-fed daisy-shaped biscuits from a silver platter.

Those who had left their rambunctious charges at home carried around photos of their pups – virtual wing-men – providing entry into increasingly dog-centric conversations….

“Um, I think your dog just had an accident,” Mr. Bashi said to the slim blonde at the other end of the Pomeranian’s leash… “It’s Marcello in Italian,” she explained with a laugh. The two chatted until Marcel grew bored and went sniffing after a new friend…

Mr. Morrison, for one, the cat owner who loves dogs, had exchanged numbers with Ms. White, the mistress of Mister Ling (dog). As the party wound down, they could be heard plotting their exit. “I’ll walk you out” he offered. “Oh, that woman is going to give me a ride home,” she replied. “But, I’ll call you. We’ll get together.”