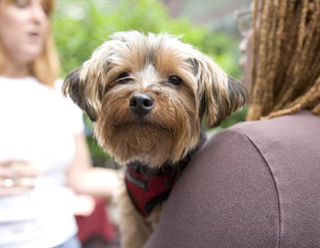 Two women have brought a whole new meaning to the phrase ‘a dog’s dinner’ with their events. Business partners Michelle Kennedy and Sheryl Matthys knew they had struck gold when they came up with a way of merging three classic New York obsessions – dogs, dating and dinner.

Leashes and Lovers, the company they launched in 2003, has more than 4,000 people on its mailing list and holds pool parties, hiking trips, Yappy Hour cocktail parties and pub crawls – all for people and their dogs. August will be busy, with ‘Brunch meets Dog’ events happening every Sunday throughout the month.

“People love their dogs and they immediately have something in common,” says Michelle Kennedy.

She and Matthys started organizing singles events a few years ago after experiencing the thrill of falling in love at first sight – with a golden retriever she spotted lazing on a bench in Central Park. Walking over to pet the object of her desire, she got talking to his owner, a man who would later become her husband (although they are separated now).

Sheryl Matthys was an actress working on a pilot television dating show, the premise of which involved sending singletons out on dates with their dogs in tow, when the two met on a business networking website.

“We had all these things in common – we liked dogs, we liked parties – so we decided to do something together where we combined dogs, parties and singles,” says Sheryl Matthys.  “It’s great, because it’s like an ice-breaker. You can come alone with your dog, alone as a woman, which is great in New York because sometimes you feel like you have to go places with a friend, especially bars. A lot of women come to our events and a lot of men are starting to catch on that this is where the women are.”

The pair are sitting in Opus 22, a sleek lounge on the border of Chelsea and the Meatpacking District on the lower west side of Manhattan. It’s strategically located around the corner from the Waterside Park dog-run, where New York’s hippest bring their pooches to play of a Sunday afternoon. A group of around 30 singletons are mixing and mingling over brunch and cocktails.

A woman in her 40s named Marion Kass nibbles on a chocolate croissant and chats to a couple at the next table while her Maltese, Daisy, wrestles on the ground with their Pomeranian, Brandon. Dressed in a white tank top, white shorts and carrying a white backpack, her outfit co-ordinates perfectly with Daisy’s fur.

“I just happened to be walking by, we had just been to the dog-run,” she says, smiling as she looks around. She pauses to take a sip of her Bloody Mary.

“This is great,” she says. “It can be hard [to meet people]. I can’t leave her alone for long – she gets frustrated and starts to destroy things. But I can’t bring her out most places. Some restaurants let dogs out on their terraces, but some won’t even do that.”

“Yeah, I’ve got to start meeting more dog people,” says John, a wiry man in his 50s whose dog, a black Cavapoo – that is a King Charles spaniel crossed with a poodle – was squirming to get out of his arms and play with a West Highland terrier at his feet, but her paws had become tangled in her leash.

“I’ve been in relationships that haven’t worked out,” he says, struggling to untangle her as she thrashes about.

“People say they are dog lovers when they’re not. It just doesn’t work. She’s my angel. I bring her everywhere with me. I bring her out for brunch. Dancing is my main hobby and I bring her along to the studio in my backpack. When I go to the gym, she comes in my bag.”

A young blond man named Brad stands by the bar, looking around for his dog, a German Shepard pit-bull mix named Max, who was playing with a massive Rothweiler named Roxy. Most of his attention, however, is focused on the DJ, a skinny Asian man with long black hair pulled back into a ponytail, with whom he flirts outrageously.

With such a big dog, would it be difficult for him to socialise but for events like this?

“Nah, I don’t take it too seriously. This is the first time I’ve ever done something like this,” he laughs. “I’m not a freak about my dog like that. I can leave him alone.”

The events have proved so popular that the company has broadened their scope beyond singles. Now anyone over 21 can go along whether it’s to find romance, friendship or to do what New Yorkers do best and work the room.

“This is a great way for us to meet and network with people,” says Nicole Fler, who came with her husband Keith and their three-year-old pug Leni.

“My husband has a book coming out this fall. It’s set in New York City, its about a group of New York City dogs that save Christmas. We thought we’d probably come here and make some connections. I guess this is more for us than for her,” she says, spearing her roasted tomato omlette with a fork as Leni eyes the plate hungrily.