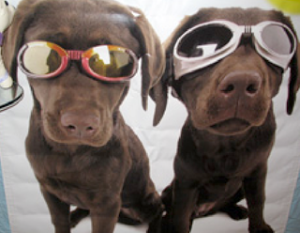 The soul-sucking moments of Pet Fashion week
by Corina Zappia

We had viewed a VH1 celeb-pets fashion special; we were familiar with Fifi & Romeo, the L.A. pet boutique that set the standard for luxe pooch living; we had once even laid unworthy paws on an $80 Sean John doggie polo sweater that Diddy had seen the need to make room for in his Fifth Avenue flagship.

Still, nothing really prepared us for Metropolitan Pavilion’s New York Pet Fashion Week which were two days of trade exhibitions by upscale retailers from around the country and actual runway shows boasting the finest in canine haute couture.

Our round-up of the most soul-sucking moments, below.

• One to file under Ill-Advised Runway Themes: The fashion show “A Child’s Journey” featured an actual little girl in JonBenet curls stroking a real live dog as a creepy and out-of-place voiceover of a little girl’s voice (presumably hers) played: “I love you so much Freddy . . . even if you are stinky sometimes.” This kind of horror-movie intro is usually followed by a sweet scene where the kid spits up blood or at least bites the head off Stinky Freddy—and really, what could make Pet Fashion Week better?—but it was not to be. Goldilocks merely fell asleep on a big fluffy bed off to the side of the stage.

We’re guessing the runway production that followed was all supposed to be part of the child’s wild and furry imagination (her dreams somehow managed to include a dude in leather bondage gear with a matching leash for his dog, plus the trotting out of, at $250,000, the world’s most expensive doggie collar.)

Featuring far bolder outfits than those usually offered during actual New York Fashion Week, “A Child’s Journey” had rock-solid winners like a 50s-inspired polka-dotted gown for the owner with a chapeau shaped to look like a frosted donut (the matching doggie ensemble included a miniature version of the hat) and a black-and-red strapless ball gown for the owner with doggie carriers actually built into the full skirt.

Insane ensembles to the uninitiated, granted—but if you’re dressing up with your dog in matching costumes you’re already a special person headed down a very special road.

• People like this need a way to meet other people like this, and thus the agency Leashes and Lovers, “where dog lovers meet.” The Founder is Sheryl Matthys, “The Dog Expert” (a look on the website reveals that she explores “how dogs impact their human relationships,” and even has an advice column where she answers toughies like, “Why must he luv only cats?”).

Included in the Pet Fashion Week brochure was an invite to her Dog Days of Summer Pool Party mixer, with promises of an alluring canine swimsuit contest.