Which Dog Breeds are Most at Risk for Swallowing Nonfood Items 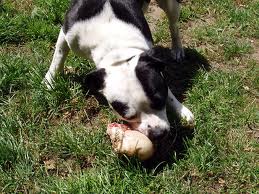 Carl Greenhous’ English bull terrier, Toby, had a strange obsession with dental floss. With every chance he got, the canine rummaged through the bathroom trash bin and picked out only the used strands of floss.

“He would usually poop it out, but sometimes it wouldn’t pass all the way through,” recalls Greenhous.

New research is revealing that swallowing nonfood items may be more common among Toby’s breed than others. A study in the Journal of Small Animal Practice is the first to look at which dog breeds are more likely to come into a veterinary hospital with swallowed objects obstructing their gastrointestinal tract. It’s also helping to determine what factors might best predict successful treatment.

Terriers Top the List
Dr. Graham Hayes, a veterinary surgeon at the University of Cambridge Veterinary School in the U.K., reviewed every case over a four-year period of dogs coming into a local animal hospital for gastrointestinal obstructions. Five breedswere significantly more likely to have swallowed something they shouldn’t have: Staffordshire bull terriers (by far the most likely), English bull terriers, Jack Russell terriers, Border collies and Springer spaniels.

“I think rooting about, scavenging rubbish and chewing up plastic toys is in the nature of terrier-type breeds,” says Hayes.

Successfully Treating Obstructions
Aside from looking at breeds, Hayes analyzed each documented case to determine what factors most often lead to positive — or negative — outcomes.

One factor was the type of object swallowed, “discrete” or “linear.” Discrete objects are things like balls, toys or bones. A linear object is something long and thin, like a piece of string or fabric (think: Toby’s fave, dental floss). Hayes found that dogs are more likely to swallow discrete objects, but linear objects are more likely to be fatal.

“Part of the [linear object] gets stuck somewhere, such as around the base of the tongue or in the bottom of the stomach, and the rest gets moved down the intestine by contractions,” explains Hayes. “Eventually … the string digs into the side of the intestine, which ruptures the bowel in several places. A whole length of intestine can become severely damaged.”

Another reason linear objects are more dangerous is they often cause only a partial obstruction of the bowel, so food and water can continue to pass through, and owners may not notice anything is wrong for a while.

“Linear objects damage a greater amount of the bowel, may cause less obvious clinical signs in the patient and can be harder for the vet to diagnose by clinical examination and X-rays,” says Hayes.

Keeping Your Dog Safe
The most obvious thing to do is to keep potentially harmful objects away from your dog, especially young dogs. If your dog swallows an object, bring your pet to the veterinarian immediately for an exam, which should include an X-ray. Hayes found that quicker diagnosis leads to better outcomes.

Of course, not all owners catch their dog in the act, so how would you know if your dog swallowed an object? You should start to get suspicious if your pet refuses to eat for 24 hours or more, but the main warning sign is vomiting in the absence of bowel movements. Hayes urges caution, however, in using anti-vomiting medicine or medicine that promotes bowel movements.

“Vomiting is the major clinical sign associated with obstruction of the bowel, and masking this clinical sign with medication can make the animal appear much better but is not addressing the underlying cause,” says Hayes. Medication that promotes bowel movements may stimulate bowel contractions and hasten rupture of the bowel, which is frequently fatal.

And for those looking to add a dog to their family and want to know which types are least likely to get into this sort of trouble, Hayes recommends a mutt. “I like crossbreeds, as they tend to be much healthier than pedigree dogs due to more outbreeding and hybrid vigor,” he says.

Brad Kloza is a freelance writer whose work has appeared in The New York Times Magazine and Discover.